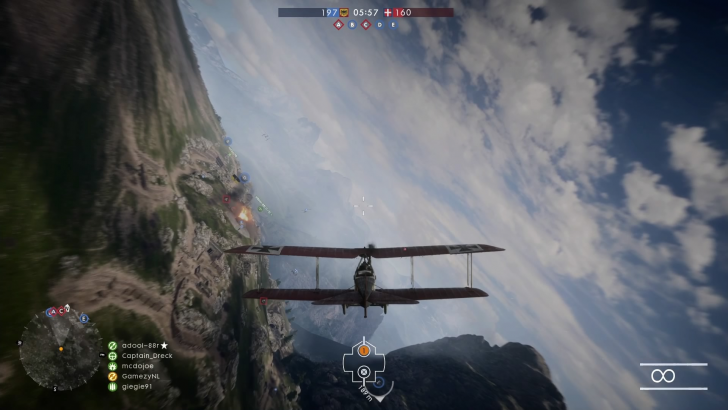 I just love flying airplanes in Battlefield 1. People tend to underestimate air superiority, but it is definitely something that should be reckoned with. If your team is unable to bring down some enemy planes, your team will be killed from above a lot.

Some people just don't seem to care about planes, while others use their planes just to bring them from spot A to B really quick. It's such a waste, With the right pilot, a plane can actually do a lot of damage. I have helped my team so many times by limiting the progress an enemy made on a capture, or weakening their defenses of another capture spot.

There are 3 types of planes in Battlefield 1. I will give a short description for each plane and how they can be used in the most effective way.

Let's start with the bombers. Bombers are very big and very slow. Because of their size and speed, they are not very agile. If you encounter an enemy plane, you better hope you have a very skilled rear-gunner in your plane. It can hold up to 2 teammates. The front gun is intended to harass the ground units some more, while the rear gun is good at keeping enemy planes off your tail. They can be very useful if the enemy has bombers themselves, or if you have some backup from fighter or attack planes. As long as you can survive long enough to get those kills in, it's worth it. I personally like the basic layout where you get 2 heavy bombs, and 8 mini bombs. You can also choose napalm and torpedo layouts though. I personally like to use them at the start of a new map. You can see why in the video below.

Fighter planes only have 1 seat. Their agility makes up for it though. This plane is so fast, that if you wish to take down an attack or bomber plane, you will have to slow down a lot. You can take very sharp corners with it, and even though this plane is meant for air-to-air combat, it can still make loads of air-to-ground kills with the trench layout. If you end up in a fight with another fighter plane, your best shot at surviving is to keep flying in circles, or to fly directly at the sun. Once your attacker lost you, you can start to hunt them. Fighter planes are my favorite planes by far. There have been maps where I haven't been killed once, all due to it's agility and speed.

Here is a compilation video I made using all of the different types of planes. It starts with fighter planes, then attack planes, and bomber planes last.