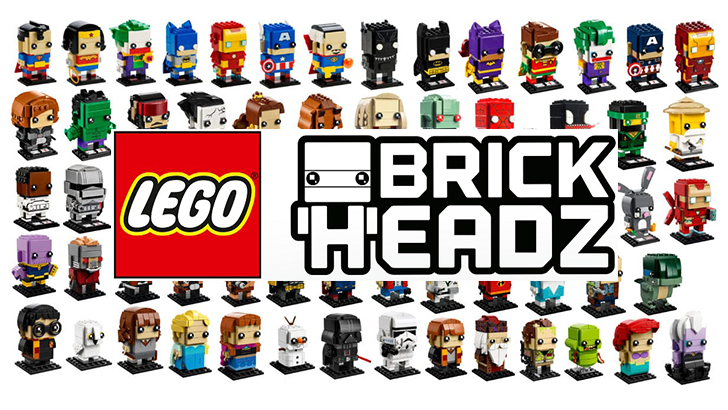 Brickheadz, I used to be a fan.

LEGO had this unique new concept 3 years ago. Brickheadz! Collectable funko POP like figures of recognizable characters. Some of them are very cool! But LEGO made some big mistakes in my eyes.

They sold some exclusive ones at the San Diego Comic Con in 2016. Unfortunately, the broader audience could not buy them yet, myself included. Not that I was interested in them back then.

The first brickheadz available from the LEGO Store came out in March 2017. I still wasn't interested in them though. They started off with brickheadz based on the LEGO Batman movie, and numbered them. It was only when my girlfriend gave me the Batman one as a gift, that I realized how fun and cool they were. And as a plus side, they weren't too expensive either, costing about €10 per brickheadz. This meant you could fill up any order with a few brickheadz to qualify for free shipping.

There was no price difference between The Netherlands and Germany, which nearly all other sets do have. This way, I could make a purchase in the online shop without feeling screwed over on the price. All good so far!

Unlike the San Diego Comic Con ones, these ones were numbered, and Batman was number 1. They also numbered the year back then, which they unfortunately stopped doing after the beginning of year 2.

But then LEGO made a shitty move, by making 2 exclusive brickheadz for the San Diego Comic Con again. The exclusiveness per se wasn't the issue here, although I really liked the ones they were selling and would not have the chance to get my hands on any of them without spending a lot of money. The shitty part was that these were numbered, just like the regular brickheadz which anyone could buy. You could no longer have all numbered brickheadz, which for a collector, is pretty shitty. To make things worse and even after a lot of complaints, they did the same thing for the New York Comic Con event.

And finally, they made 4 LEGO Shop exclusives, which thankfully were available for the wider public, but the damage had already been done. You might argue that funko POP has many store exclusives, but at least you can go to that store and buy it. There are a lot of people who collect LEGO and want a full collection. It's why prices of old LEGO sets which aren't being made anymore are so high. The Comic Con exclusives were available on EBay in bids starting at €230. I was not planning on spending that much money on 2 Brickheadz. And you needed all 4 to make your collection complete!

I still decided to continue my collection though, somewhat hoping the Comic Con exclusives would be made available for everyone in time. Unfortunately that never happened. LEGO did start pumping out a ton of Brickheadz in 2018. There were so many in such a short time, I could not afford to buy them all at once.

This is where the shittiest move comes in. Even though they weren't announced as exclusive, or retiring soon (some even had their "NEW" tag still on them), LEGO discontinued a lot of Brickheadz. Just like that. I think I saw 3 Brickheadz available for 2 days before they were sold out. After calling customer support this week since "Sold out" got replaced with "Retired Product" on a few of these sets, the LEGO employee on the phone confirmed all retired and sold out ones are likely to never to return again. Meanwhile a lot of older brickheadz are still available.

Thanks LEGO. This made me want to sell most of my brickheadz, except for the labeled series and seasonal ones. In fact, I put them up for sale already. I wont say I will never buy a Brickhead again, but it will have to be a very special one before I do.