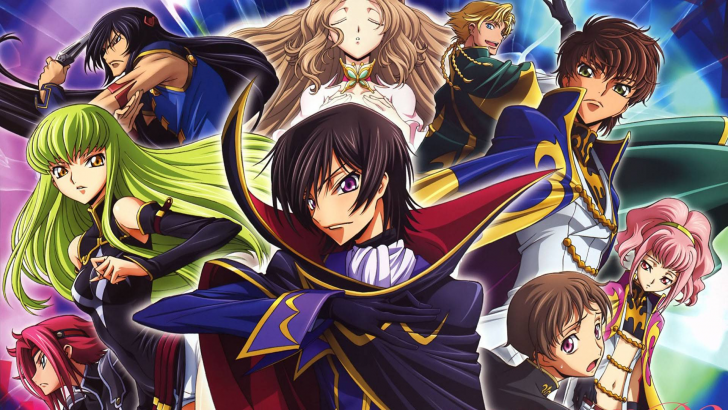 Code Geass is an anime series, which I just finished watching. The series is about an exiled Britannian prince named Lelouch. He has been hiding in Area 11 with his sister Nunnally, ever since their mother was killed. Nunnally is both blind and crippled since she witnessed the assassination on her mother, and Lelouch has sworn to protect her.

Most of this story takes place in Area 11, or as it's formerly known: Japan. As the name suggests, Japan has been conquered by Britannia, and all of its citizens have been stripped of rights and freedom. The Holy Britannian Empire (known to us as the Americas) is an imperial monarchy which conquered most of the world through war with mechs, or as they are called in the series: Knightmare Frames.

In the first episode, Lelouch is nearly killed by Britannian soldiers, after getting himself involved with terrorists by accident. The terrorists thought they had stolen a neurotoxic bomb, but instead, they stole a girl who has a special power. She was held captive and experimented on by Britannia. Lelouch comes in contact with this person, and she ends up saving his life by giving him her special power. This power is called Geass.

The power of Geass allows Lelouch to make people do whatever he orders. There is a catch though: he can only use it once on every person, and he has to have direct eye contact with that person in order for Geass to work. It can be seen as a really powerful form of hypnosis.

With this new power, Lelouch swears he will find the killer of his mother, and obliterate Britannia. He wants to do all of this to create a better world for all the oppressed, but especially for Nunnally.

The story line of this anime can be called exceptional, and makes you think about the choices Lelouch makes. You're rooting for Lelouch at the start, but as the series continue you're not sure who to root for anymore. More and more people die due to the actions Lelouch makes. Some even close to him. At later times, the impact of Lelouch actions can only be called cruel. The decisions are hard though, since Lelouch does all what he does for a better world, and he has a ruthless opponent who will not hesitate to kill many innocent people.

There is also a big difference between season 1 and season 2, where the latter is a bit darker. In season 1 Lelouch wins most of his battles, and it's all about liberating Japan from Britannia. In season 2 Lelouch has bigger plans, but he loses some big battles, and a lot of his friends in the process. The friends that are still alive start to hate him for his actions, and abandon his side as well. The ending is superior though. It makes you love Lelouch and forget about all the wrongs he did.

For me, this is without doubt one of the best anime series I have watched up until now. It will make you think about the hard decisions. It will make you feel happy and sad, but also angry and disgusted at times. If you love anime, you should definitely watch this one.

Nancy
Code Geass is a very popular anime series, I have watched it about 4 times and still love this. I have many code Geass hoodies!