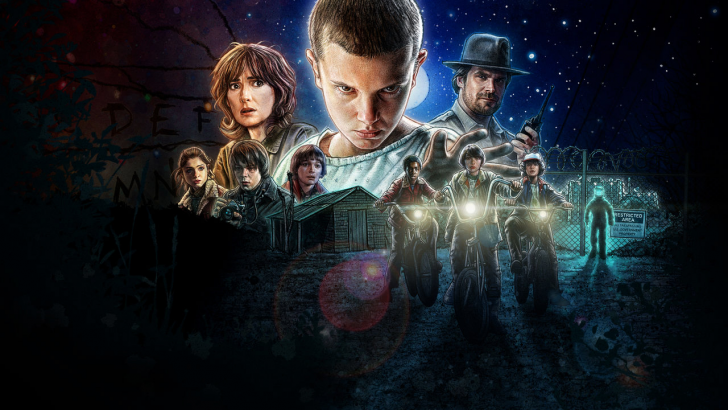 Stranger Things takes place in a small town called Hawkings. It's the kind of town where everyone knows everyone. The series main characters are four friends at the age of 12, named Mike, Will, Lucas and Dustin, and a girl named Eleven.

The series start off in a cellar, where Mike is playing Dungeons and Dragons with his friends. They just encountered a monster in the game, but before they can beat him, it's time for Mike's friends to go home. When Will nearly reached his house, some kind of creature appears on the street. Will is startled and tries to evade this creature. He falls of his bike and makes a run for home. I don't want to spoil too much, but I can tell you Will is missing since that evening.

A search operation is going on, and of course Will's friends want to help as well. They start their own search operation, but instead of finding Will, they find a nearly bald girl that is about their age. She is dressed in hospital clothes and seems to be on the run. They decide to hide her in Mike's house for the time being. Soon enough though, they find out she is called Eleven and has superpowers, which might help them to find Will..

The series brings back all the good things of the 80's, and so you cannot watch this series without thinking about E.T. or The Goonies (depending on which one is your favorite) at least once. It has all the ingredients of these movies and more, from kid actors (who do a supreme job in acting), to sci-fi and adventure and an epic getaway on cycles.

The series is 8 episodes long, and each episode takes about 50 minutes of your time to watch.

Season 1 ended with an open ending, and a very small cliffhanger. Luckily season 2 is already being made.
Season 2 will air on October 31 2017 (Halloween) on Netflix.