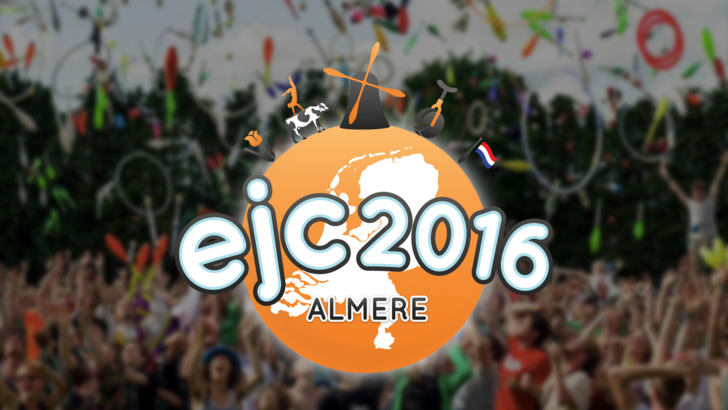 One of my best friends has been busy organizing the EJC of 2016, which would be held in the Netherlands for the third time. Together with a bunch of other people, he was one of the main organizers. He has been really busy the last year to make sure the festival would be a great experience.

Of course, he could use all the help he could get. I already let him know I would be happy to volunteer and help around wherever help was needed, and so I did. I took two days off from work and helped getting everything in place before the start of the festival and picking up artists from the airport. While doing so I got burned by the sun, because of the unexpected good weather.

At the start of the festival I directed traffic to the parking spot, and at this time I started realizing how big this festival actually is. There were so many people who bought a ticket for the entire duration of the festival, and they came from a lot of different countries. From Ireland to Italy, and some even came from America!

Unfortunately, I could not visit the festival the first few days. The Olympics were about to start, and it is one of the main events for the company I work for. I did however follow most of the festival on the internet. There was this awesome livestream where you could see some of the shows, or just some reporters on site that let you experience the festival while at home (or in my case, at work).

At Wednesday the Olympics had their unofficial start, with the first soccer matches. Because of this, I had a standby shift that lasted until 4:00 AM. I knew I wouldn't be able to wake up and answer the phone if I went to sleep, so I decided to go to the festival instead. If necessary, I could work from there.

Turns out I could not have made a better choice! I helped some more while some lights were installed for the upcoming fight night, which was held that evening. Fight night is a battle between jugglers, obviously. To win, you have to keep juggling longer than your opponent. Sounds dull right? On the contrary! You can try to smash away the other jugglers clubs, or just steal one of theirs. It became a very popular sport over the last few years, and even has a ranking site which can be found here: http://fightnightcombat.com/

There were several tents that you could visit during the festival, like the Open stage tent, the Gala tent, the Renegade tent and there even was a tent for kids. Most of these tents were empty during the night though, except for the bar and renegade tents. The bar tent had a big bar inside, as the name suggests. This tent was used for DJ's and bands that would come and play music till 3:00 AM, every night. The other tent which might be worthy of a visit at night is the renegade tent. This depends on the host and "artists" though, since it can be really dull as well. The concept of the renegade tent is simple: Preform a trick, if you do it right, you get a free drink which contains alcohol (mostly beer). Fail, and you get to take off a piece of clothing before you have to retry your trick.

Another place worth visiting was the fire space. People would perform very nice tricks with fire during the night. I saw the opening of the fire space just once, but it was awesome. There were some guys with gas masks acting like they were insane and going crazy about fire. They were eating fire and running around to people while screaming "Fire!!". It was a simple but fun act. Once all of the fire bowls on the edge of the fire space were lit, the fire space was open for everyone who wanted.

I spent most of my time in the bar tent though, where I would dance (if I had enough beers) with some friends, and just enjoy the music at other times. Of course, everyone likes different kind of music, but even though the music wasn't always that great, we would still make it a great night by doing weird dance moves, or making fun of the band. We even made a huge parade one night, which was awesome. It nearly filled the entire tent.

During the day, when I could not visit the festival due to work, I saw some open stages on the stream which were amazing. These people performed some really awesome tricks for everyone to see. Some of these acts just really belonged in a professional circus, they were that good.

All in all, the EJC struck me as a very social event. People would always be willing to help each other to learn new tricks with juggling balls, clubs, diabolos, acrobatics and even unicycling. A lot of people know each other from previous EJC's. Others come for the first time, but are bound to make some friends during the festival. There's people from all ages and cultures, some even come every year as part of their vacation.

At the end of the festival, there is a so called "Gala show". You have to buy a ticket to see this show, because it is very popular. Some of the best artists from all over the world have been booked to perform at this show. It's the traditional ending of the festival, and you have to make sure to get tickets for it early, otherwise you will be too late and the shows will be sold out already. It's called the "Gala show" because it's tradition that in the last show the organizers go on stage in Gala outfit. They receive thanks for organizing the event, and thank all the people for coming in return. If you ever happen to visit an EJC, this is a must see show.

I had a great time visiting the festival in the evenings when I could. I just wish I could've helped even more. It was the first time I ever visited and EJC, but who knows, I might visit some more in the future. Even though I can only juggle with three balls, I feel very welcome in this warm festival full of nice people.